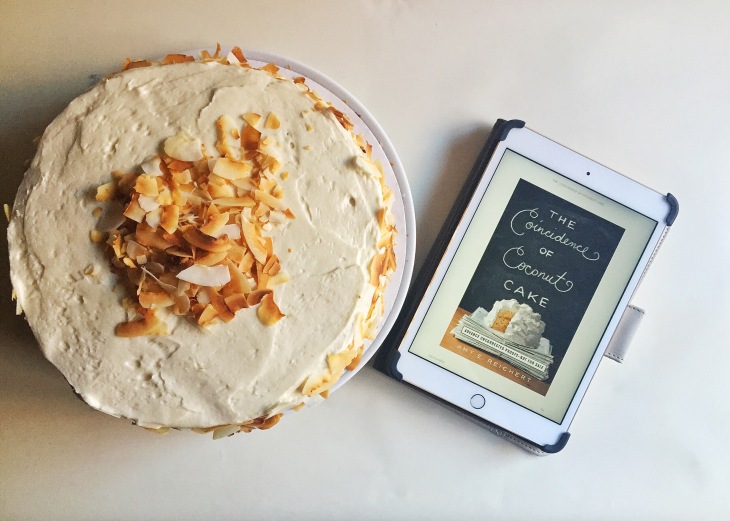 I recently read a fun book titled the Coincidence of Coconut Cake by Amy Reichert. It was a light and fun read. Luella, a talented chef, faces a number of obstacles, including the slow demise of her restaurant due to a food critic’s review. Luella ends her relationship with her manipulative fiancée, but soon starts spending time with Al, a handsome Brit, showing him all the good eats around Milwaukee. Although the book is predictable at times, it really made me want to go visit Milwaukee and eat all the delectable foods described in the book.

The cover of the book features a delicious looking coconut cake. From the very moment I opened the book, I was craving a slice of coconut cake. And since the book includes a recipe for it, I decided to make the cake before I had even finished the book.

The white cake is light and fluffy, and the frosting is rich and decadent. The cake has three components: the cake layers, the frosting, and I added a third component. I made a coconut custard filling to sandwich between the cake layers instead of using frosting for the filling, as the recipe calls for. I felt the cake needed something moist and creamy to offset the fluffy cake and the heavy frosting.

You can find the recipe for the cake here.

Recipe for Coconut Custard
Adapted from this recipe by Bobby Flay

1.Combine the milk and coconut milk. Add ½ cup of the milk mixture to a small bowl. Add the egg yolks, sugar, cornstarch, rum, and pinch of salt.
2.Add the rest of the milk to a medium saucepan. Scrape the vanilla bean and add the bean and seeds to the saucepan as well. Bring milk to a simmer over medium heat. Turn the heat off. Slowly add the mixture from the bowl into the saucepan, whisking constantly to make sure that you don’t scramble the egg mixture. Once all of the egg mixture is added and well combined, turn the heat to medium and bring to a simmer. Whisk constantly, until the custard has thickened. Whisk in the vanilla and coconut extracts.
3.Transfer the custard to a bowl, until cooled. Alternatively, to make the custard cool faster, spread it on a quarter cookie sheet or a large shallow plate, cover it with plastic wrap and place in the refrigerator until completely cooled.
4.Once the custard is cold and firm, transfer it to a bowl, and whisk with a hand whisk or hand mixer. Add the heavy cream, one-tablespoon, at a time until all the heavy cream is incorporated. Return the custard mixture to the refrigerator until very cold and firm.

Disclaimer: I received an electronic copy of the Coincidence of Coconut Cake for review purposes. I was not compensated for writing this post. All views are my own.