This posts starts with me on a plane headed to Panama furiously typing ideas for the final Charcutepalooza challenge. I wondered whether my three large home-cured Spanish chorizos, which I carefully packed into my checked bag, would be confiscated or would make it to my destination. 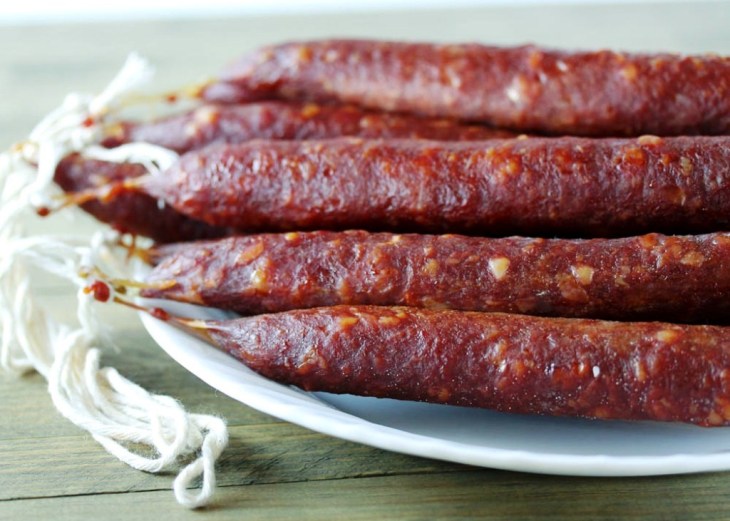 I can’t believe I made it this far along. Typically, I dedicated one weekend a month to the charcutepalooza challenge. Technique-wise, I’ve cut down ducks, trimmed down pork bellies, salted/brined/smoked fish, ground meats, stuffed and cured sausages, made pates and rillettes, and learned how to butcher and use up all parts of a pig. But most importantly I’ve met so many fabulous people who share my passion for charcuterie: other charcutepalooza participants, and local farmers and butchers.

So, what is the final challenge exactly? To create a menu, a dish, or a platter with three or four items from this list:
-smoked, cured or brined whole cut of meat, poultry, or fish
-a dried, cured sausage
-pork belly, any preparation
-sausage, any kind
-pate, terrine or mousseline
-rillettes or confit

Needless to say, it was difficult to decide what to make given all the options. I finally settled for a meal with a Spanish twist using my favorite Charcutepalooza items: Spanish chorizo, salt cod, brined/smoked chicken, and unsmoked bacon. 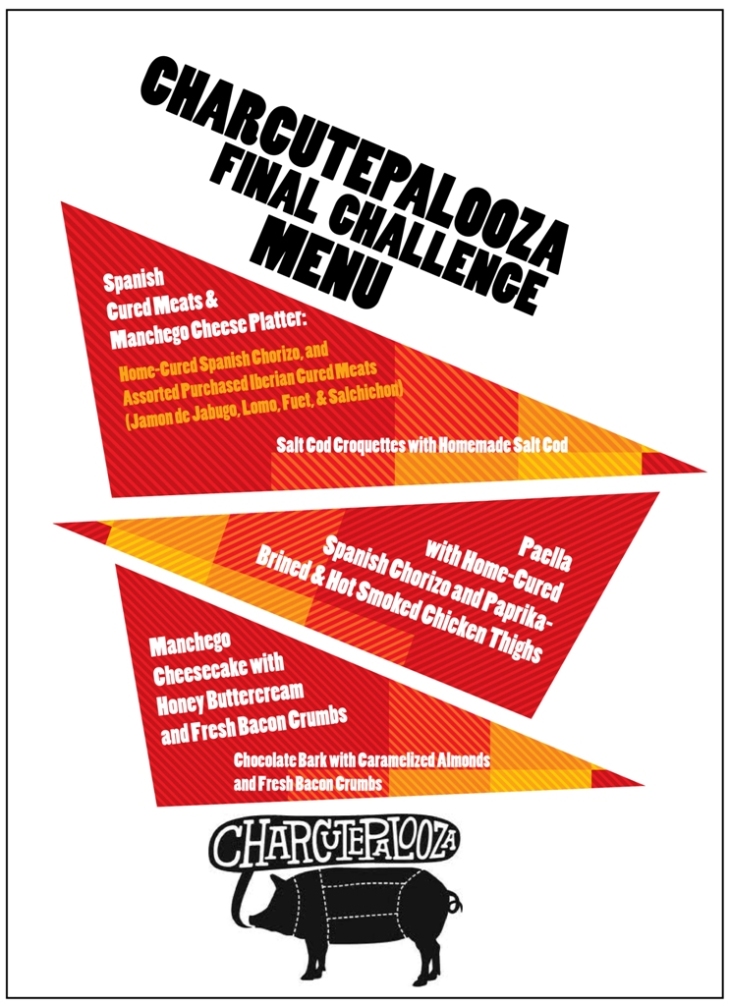 There were challenges in procuring the ingredients for the meal. It took three tries to get pork belly for bacon, and we don’t have fresh cod in Panama (at least not according to fishmongers at the seafood market) so I had to use another kind of fish–and I don’t think I dare say what kind of fish I used. But in the end, it all worked out. 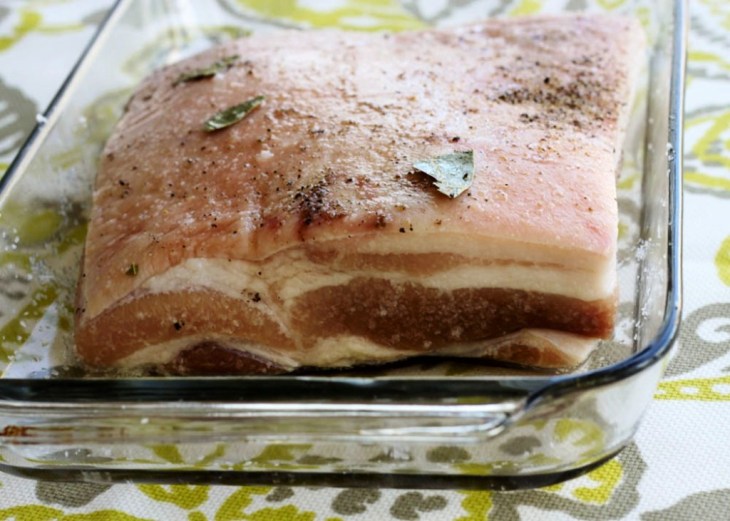 We love Spanish food, and don’t need any excuses to throw a paella party. Every dish was a hit with my family. I’ve been making salt cod croquettes and paella for a long time, and to be honest I never really use a recipe for either. So this was a great opportunity to get both down on paper.

The croquettes are easy to make and delicious. They are a mix of salt cod and bechamel sauce: super tender and creamy on the inside, and crunchy on the outside.

Usually, I would make paella with several different types of seafood. However, this time I used only Spanish chorizo and brined/smoked chicken thighs. I wanted to use rabbit, but couldn’t find any. The paella came out great, the smoky taste from the chicken thighs went well with the spicy and earthy Spanish chorizo.

Finally, for dessert I used crispy, crumbled bacon in two dishes. I had never made the Manchego cheesecake before and was afraid that it would turn out to be a weird combination of flavors. I was pleasantly surprised to discover that the flavors go really well together. It is definitely not a common dessert. Now, for the chocolate bark, the bacon really tempers the sweetness from the chocolate and adds a nice crunch. 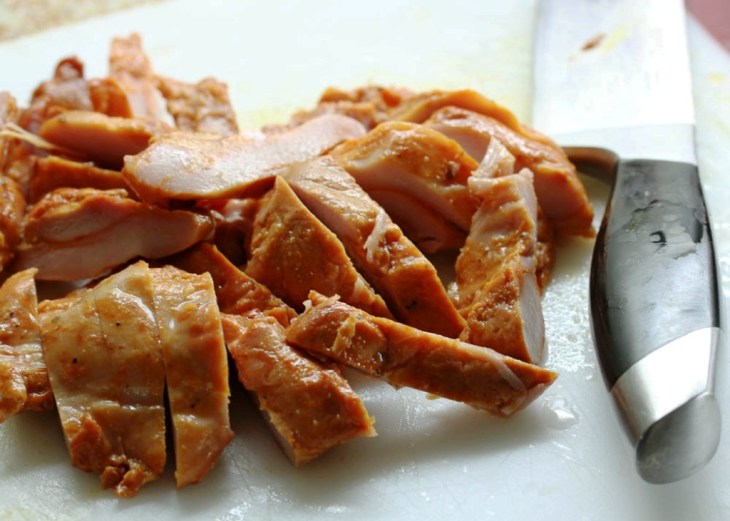 Charcuterie Board with my home-made Spanish chorizo, an assortment of Iberian Cured Meats, and Manchego Cheese 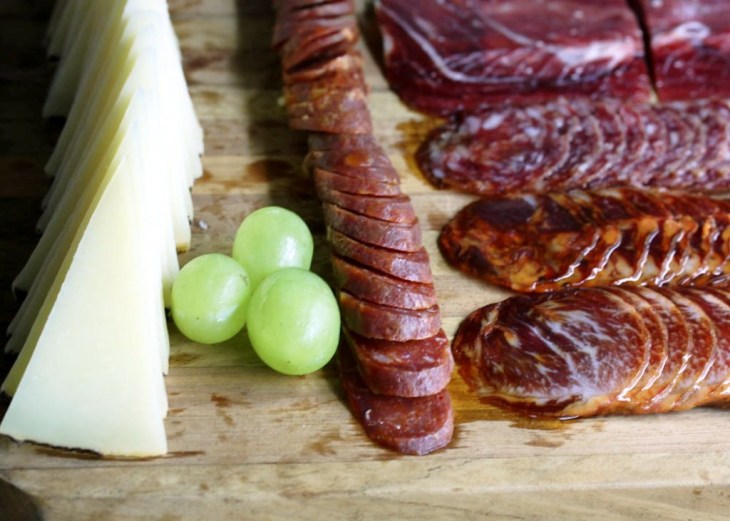 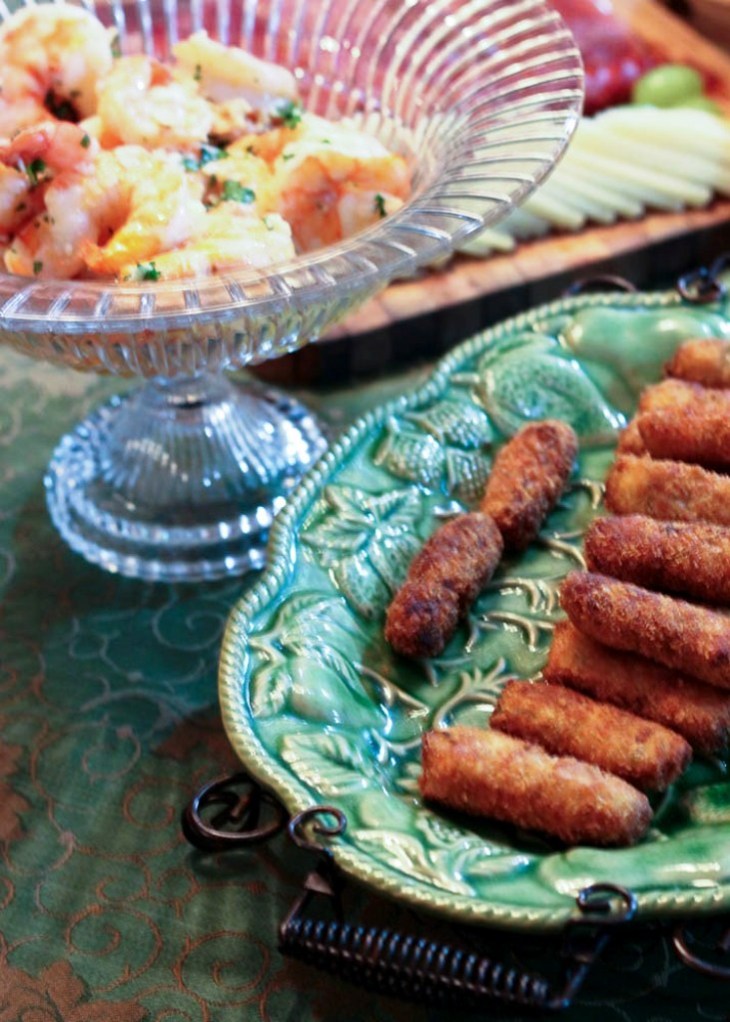 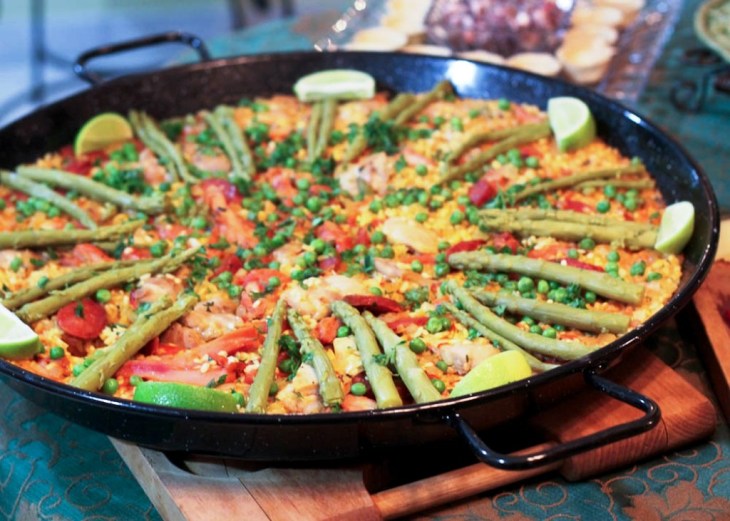 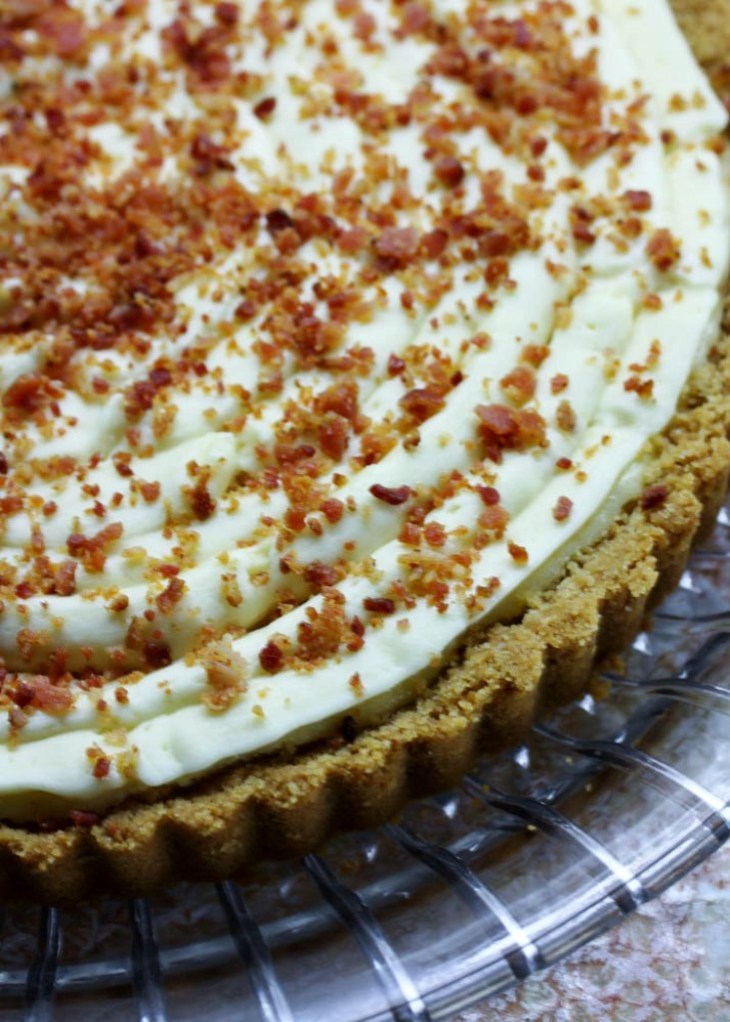 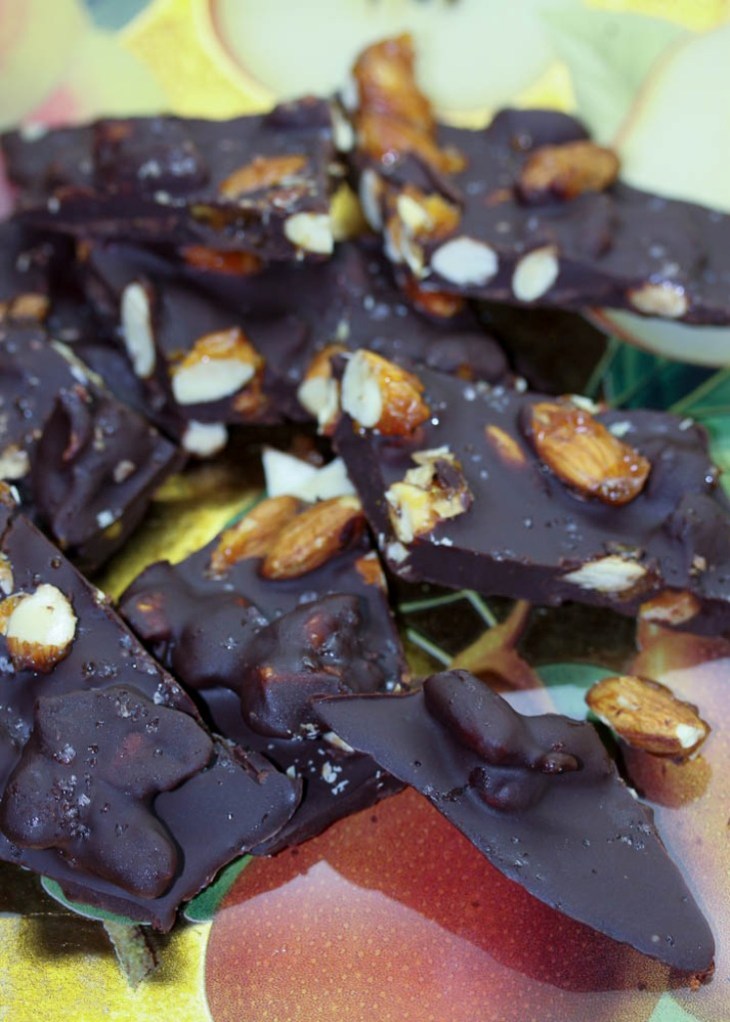 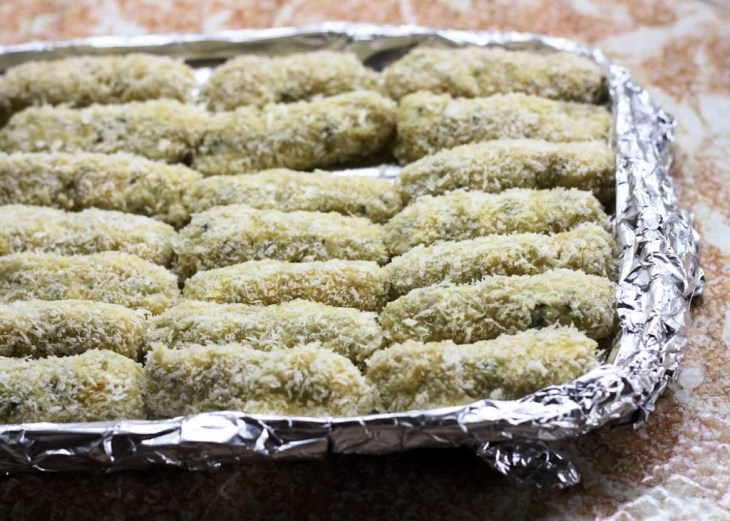 Salt-Cod Croquettes—Croquetas de Bacalao
Makes about 45 croquettes
1 lb salt cod
1 large onion, finely chopped
2 large garlic cloves, finely minced
2 tablespoons olive oil
¼ cup flour
2 ½ cups whole milk
¼ cup finely chopped parsley
Salt and pepper
Extra flour for dredging croquettes
2 large eggs, whisked
About 1 cup panko breadcrumbs
1. Place the salt cod in water overnight, changing the water several times to remove extra salt.
2. Drain the salt cod well, and dry with paper towels. Flake the salt cod into small pieces.
3. In a large skillet, over medium heat, cook the onion and garlic until soft. Add the flaked salt cod and cook for an additional 5 minutes.
4. Add the parsley and flour, cook for 5 minutes. Add in the milk, and cook until thickened. Taste the mixture and add salt and pepper as needed.
5. Place the mixture in a shallow dish and put in the refrigerator until it is cold and firm, 1 to 2 hours.
6. Form the croquettes by taking about 2 tablespoons of the mixture and shape the mixture into a little log about 3 inches long. Prepare 3 shallow dishes: one with flour, one with the whisked eggs, and one with the panko breadcrumbs. Dredge the croquette in flour, then carefully roll it in the egg, then dredge in panko breadcrumbs.
7. Refrigerate the croquettes until you are ready to fry them.
8. Fry the croquettes in canola oil, until brown and crisp. Serve immediately. 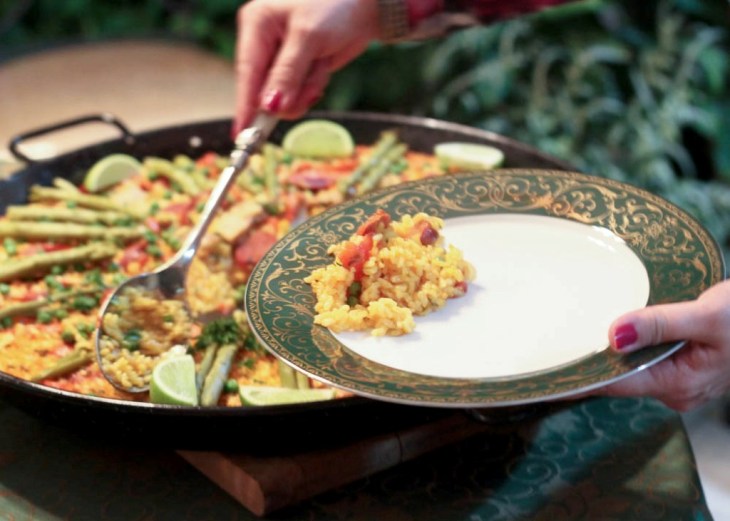 Paella with Spanish Chorizo and Smoked Chicken Thighs—Paella con Chorizo Español y Encuentros de Pollo Ahumado
Serves 20
9 to 12 cups low sodium chicken broth (how much liquid will depend on type of rice used)
A big pinch of saffron
8 ounces Spanish chorizo, cut into 1 inch slices (I like to remove the casing)
1 large onion, finely chopped
8 garlic cloves, finely minced
1 kilo (2.2 lbs) Bomba rice (or Calasparra, or you could also use Arborio)
1 teaspoon Bittersweet Smoked Spanish Paprika (Pimenton de la Vera Agridulce)
1 can peeled tomatoes, hand crushed
16 smoked chicken thighs, cut in one inch slices
¼ cup flat leaf parsley, finely chopped
½ cup frozen peas
Garnishes:
Asparagus
Roasted red peppers, sliced (I completely forgot to add these and did not realize it until after I photographed everything)
Lemon slices
Chopped flat leaf parsley
1. In a large pot, place the chicken broth and saffron and bring to a simmer. Taste the chicken broth and add a little salt if necessary.
2. In a 26 inch paella pan, over medium heat, add olive oil. You need enough oil to coat the bottom of the pan, about ¼ cup. Add the chorizo slices and cook until it starts to brown and release some fat. Add in the onion, and cook for about 5 minutes or until soft. Add in the garlic and rice, stirring it well to coat it with oil. If the pan is too dry you can add a bit more olive oil. Toast the rice for 5 minutes. Add in paprika, the tomatoes, smoked chicken thighs, and ¾ of the broth. Cook and stir for about 5 minutes. Do not stir the rice from this point on.
3. When the rice has absorbed about half of the liquid, add in the frozen peas.
4. Cook until liquid is absorbed and the rice is almost done, about 20 minutes. If your rice is not done yet, add more liquid, cook for another 5 minutes and taste for doneness again. Cover with foil and let stand 10 minutes. If you want some socarrat, the caramelized layer of crusty rice, at this point place the uncovered pan over high heat for 5 minutes or until the socarrat has developed.

Manchego Cheesecake with Honey Buttercream and Bacon Crumbs—Tarta de Queso Manchego con Glaceado de Miel y Tocino
(Adapted from Diario La Prensa, A La Mesa, 11-5-11)
Crust:
1 large package Galletas Maria (you can find these in the Hispanic foods section of your grocery store)
4 ounces melted butter, 1 stick
Filling:
8 ounces cream cheese
1 cup shredded manchego cheese
¼ cup sugar
¼ cup whole milk
2 tablespoons cornstarch
1 large egg
¼ cup sour cream
Buttercream:
2 ounces butter (½ stick)
¼ cup honey
2 ¼ cups confectioner’s sugar
3 tablespoons bacon crumbs
1. Pre-heat oven to 350°F. Butter a tart pan and set aside.
2. Place Maria cookies in the bowl of a food processor and process until you have fine crumbs. In a large bowl, mix the crumbs with the melted butter. Press the crust into the tart pan, making sure you get an even layer and an even border. Refrigerate until ready to use.
3. In a food processor, add the shredded Manchego cheese, and milk. Process until ingredients are incorporated.
4. In the bowl of an electric mixer, beat the cream cheese until creamy. Add in the milk, sugar, cornstarch and egg. Beat in the sour cream. Do not incorporate too much air while beating.
5. Add the cheese mixture into the prepared crust, and bake 30-40 minutes, until the center is feels slightly firm. Let the tart cool for 1 hour.
6. Make the buttercream. In the bowl of an electric mixer, beat the butter until creamy, and beat in the honey. Slowly beat in the sugar. Pipe the buttercream over the cooled tart, and sprinkle with bacon. 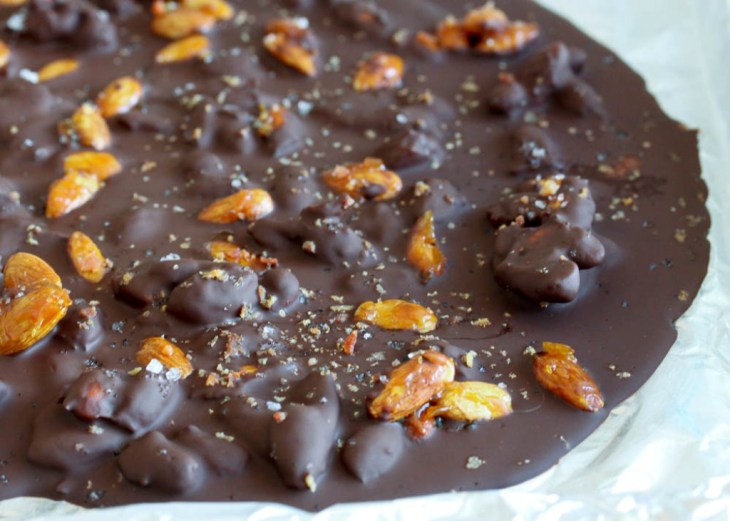 Chocolate Bark with Caramelized Almonds and Fresh Bacon Crumbs
You can find the recipe here. I added some crispy fresh bacon (unsmoked) crumbs after sprinkling with salt.

I can’t believe the year of meat is over. I will miss our monthly twitter discussions, the vast array of monthly charcutepalooza blog posts full of creative ideas, and the amazing charcutepalooza community. It has been a great year.

Thank you to Cathy and Kim, who started it all. Also, thanks to Michael Ruhlman, and Bob del Grosso, for offering advice and answering our numerous questions.

And thanks to my brother for designing the fab menu for my blog post! 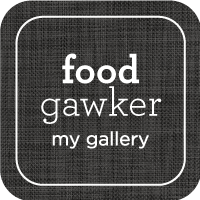