You may have noticed the blog is sporting a new theme, wanted to try something different. Let me know how you like it. I can’t believe I’m inching close to 50 blog posts–this is #49! I know it doesn’t sound like a lot, but I really didn’t think I would stick with it for this long. My sincere thanks to all of you who stop by, read, comment, and share. Your support means a lot to me ;O)

Today’s post is about pão de queijo, a Brazilian cheese bread traditionally made with sour cassava flour also know as sour tapioca flour or polvilho azedo. The sour cassava flour, as opposed to the easier to find sweet cassava flour, is fermented and has a sour/acidic taste to it that is supposed to impart a better flavor and produce a better crust. There are other Latin American countries that have similar cheese breads: in Bolivia and Argentina they have cuñapes, in Paraguay they have chipacitos, and in Colombia they have pan de bono.

The first time I had pão de queijo it was with a friend who was visiting from Brazil. She took me to an amazing Brazilian restaurant in Tenleytown, next to the Dancing Crab. I don’t recall the name of the place, probably because it went through so many incarnations: Amazonia Grill, Doña Flores, La Vida Loca, A Caravela… In any case, what I do I remember is a pão de queijo with a dense but fluffy interior, a slightly chewy texture, and a crisp golden brown exterior. 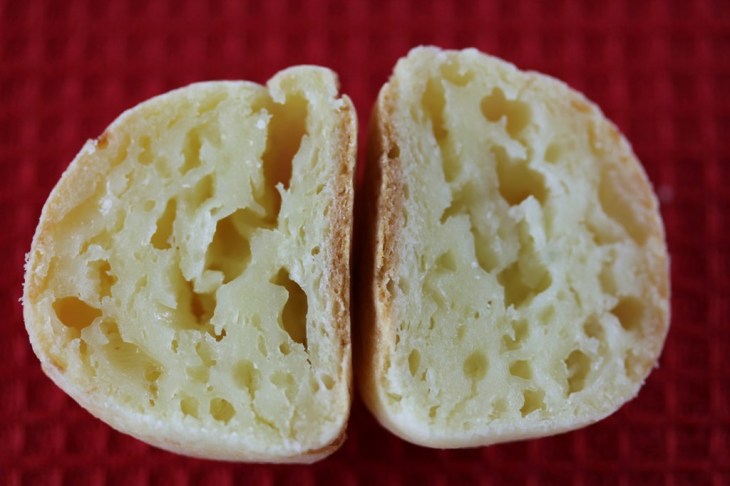 For years I have been trying to replicate this at home. I have been unable to find the sour cassava flour that is called for in most recipes. I did find sweet cassava flour and several pre-packaged mixes, all of these yielded doughy pão de queijo with runny/uncooked interiors that refused to set no matter how long I baked them. I recently came across this fake out recipe that uses cooked potato and cornstarch in place of the sour cassava flour. I changed the recipe a bit: added oil, egg, salt, and a bit more cheese.

The results are delicious. It came pretty close to my memory of that first pão de queijo. The best part is that you can make these with ingredients that probably are already in your kitchen. And all it takes is putting the ingredients in a food processor, kneading the final bit of cornstarch in, and shaping the balls. You could substitute mozzarella for the cheese, or a Latin American style queso blanco. I like the feta/asiago cheese combination. It provides some sourness that otherwise would be missing because no sour cassava flour is used.

Although this recipe came out great and more than met my expectations I still plan on making a traditional pão de queijo. I will be trying this recipe from Nando at Cuca Brazuca once I manage to get my hands on some sour cassava flour.

If you live in New York City, Arthur Bovino from Always Hungry New York went to 14 establishments to find the best pão de queijo in the city. You can check out the rankings here.

Do you know of other cheese breads similar to pão de queijo? Anyone knows somewhere in DC where I can find the sour cassava flour? 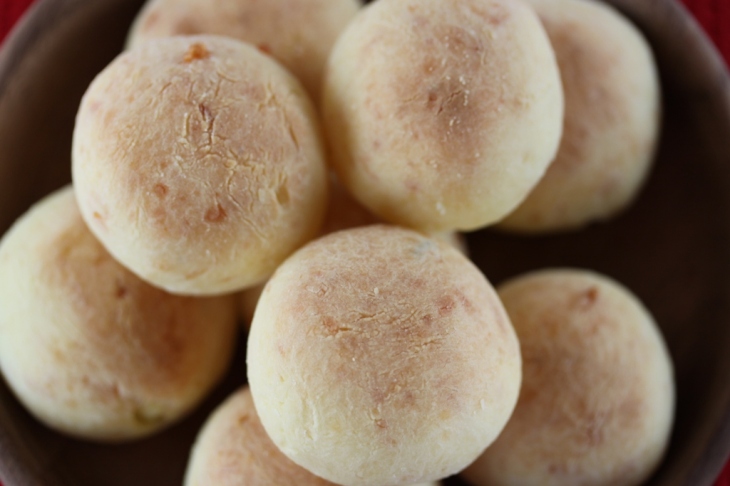 Procedure:
1. In a small saucepan, place the potatoes, cover with water, add a couple large pinches of salt and bring to a boil. Cook until potatoes are very tender. Drain potatoes and return to the hot saucepan for a few minutes, or until they are completely dry.
2. Pre-heat oven to 350°F.
3. Place the still warm potatoes in the bowl of a food processor. Process until thick and pasty. Add ¾ cup of the cornstarch, oil, egg, and salt and process until smooth. Add the cheese and process until it is well incorporated.
4. Sprinkle the remaining ¼ cup cornstarch on your kitchen counter. Turn out the mixture from the food processor on the counter. Knead the dough until it comes together. Divide the dough into 16 pieces and roll into balls a bit smaller than golf balls. Line a cookie sheet with parchment paper and place the balls on it. Bake for 25 minutes. If the tops of your pão de queijo have not browned (mine didn’t) put them under the broiler for 1-2 minutes, or until the tops are a light golden brown. 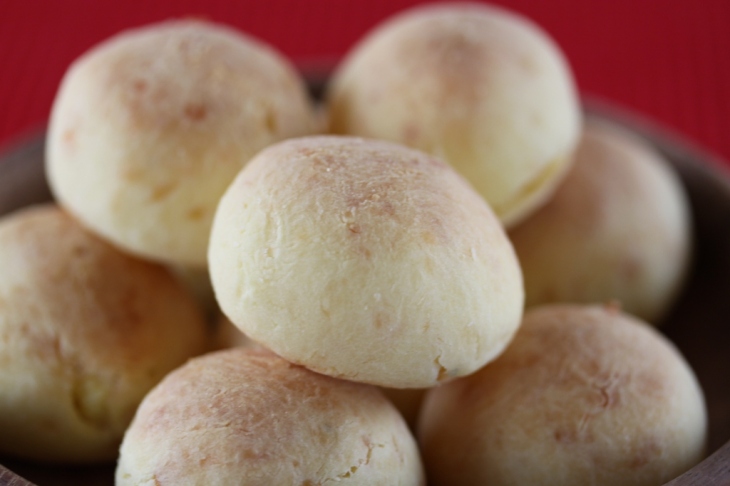